WhatCMS.org handles requests from users around the world seeking to find out more about the websites they're using.  There are hundreds of content management systems in use on the web with significantly different amounts of usage.

A humble beginning, WhatCMS.org started the same way many projects start. A simple, single page website with a few paragraphs of text. Our detection algorithm was fairly simple and detected just the most popular systems.  Here's what the site looked like: 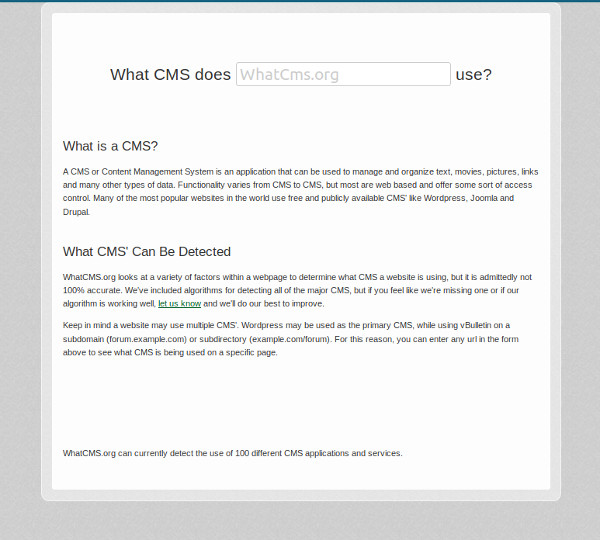 We expanded our detection algorithm and increased the number of systems we detect up to 100. Still a very simple site with a single page.

Our next expansion brought us to 140 content management systems and we still just have a single page site.

We began seeing increased usage and finally moved away from a single page site. We created a page for each CMS displaying the most popular sites that were detected for each CMS.

Our homepage was enhanced to show recent searches and detections. We also increased the number of detected systems to 163.

We stepped up our efforts to increase detection accuracy and added more systems bringing the total to 192.

We unveiled our blog to better communicate change, new features and issues with our users.

The limits of the free API were too low for many users and we introduced three additional API plans with higher limits.

Additional push to increase detection accuracy and thoroughness brings the total number of systems to 260.

We now detect 320 CMS applications and have added a bulk detection option for API users.